Contrary to initial data after installing a Samsung 970 EVO 1 TB NVMe SSD, I noticed today that the temperatures are quite high in my supersilent case. So I improvised a virtually noiseless fan cooling for it.

Luckily I found a 40mm fan that was silent enough at low speeds. I used two of my ancient and long-unused potentiometer cables connected in series and turned both to minimum. The fan still revs at 2500 RPM it seems, but inaudible from 50 cm distance and farther.

(Sadly I cannot control it in software because the only remaining fan connector on my shitty Asrock board is defective since two days after getting the board and only allows speed control with PWM fans. But I'd still want it in hardware so that it is not annoying outside of Windows where fan control actually works. - Linux is ugh.)

I had to use two wire straps, one with twists at three points, to mostly stabilize the fan in one position. I also put rubber pads on its base to avoid any potential vibration travel onto the PSU case.

I would have preferred to use a drive benchmark program, but I couldn't find one that simply does continuous max speed reads. (And only reads; I don't want to generate unnecessary writes on it.) 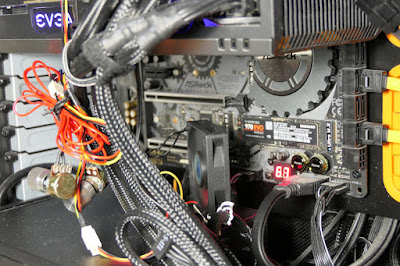 UPDATE: Since I spontaneously decided to get another SSD to resolve some OS multiboot stress, I already tested directing that fan not at the one SSD, but straight down at the mainboard between the then two SSD controller chips. Cooling effect (at least without load, but expecting same under load) is the same if not a bit lower even. And without fan cooling the issue isn't even gradual heat soak. The controller temperature goes up from 48°C to 57°C within a minute.
It is a corner with almost no air flow, and this shows what a tremendous difference just a little bit of air flow makes. (Especially in blowing configuration.)
Doesn't matter that it's gonna whirl around there and is not a smooth flow. the turbulence will allow the air pocket there to gradually mix with the main case flow.
I consider it an issue that the controller chip doesn't have at least an optional heat sink you can put on it where you have the space (i.e. not laptop). The sticker is said to be heat conductive, but it does so little, and apparently it cannot really dissipate effectively.
I only tested with 300 MB/s. Imagine if you're copying between SSDs at 4-digit speeds, what head load that must be generating. (I'm gonna test that once the new SSD is here, since I need to copy some stuff over then anyway.)
UPDATE 2: Found a suitable benchmark. 1800 MB/s continuous read. Controller temperatures idle/load:
no cooling: 59-82 °C
fan cooling: 49-70 °C
850 EVO SATA SSD (non-cooled) 450 MB/s: 30°C idle, 43°C load (Not sure what component the sensor is measuring there, but in any case this shows the advantage of not being an extremely compact device.)
Posted by Dowlphin at 19:30